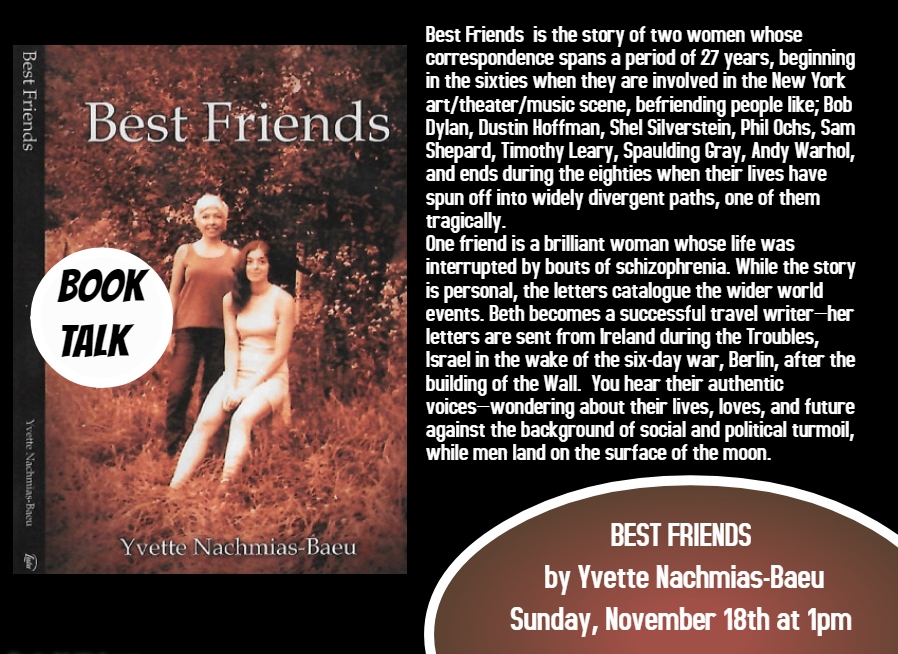 Best Friends  is the story of two women whose correspondence spans a period of 27 years, beginning in the sixties when they are involved in the New York art/theater/music scene, befriending people like; Bob Dylan, Dustin Hoffman, Shel Silverstein, Phil Ochs, Sam Shepard, Timothy Leary, Spaulding Gray, Andy Warhol, and ends during the eighties when their lives have spun off into widely divergent paths, one of them tragically.

One friend is a brilliant woman whose life was interrupted by bouts of schizophrenia. While the story is personal, the letters catalogue the wider world events. Beth becomes a successful travel writer—her letters are sent from Ireland during the Troubles, Israel in the wake of the six-day war, Berlin, after the building of the Wall.  You hear their authentic voices—wondering about their lives, loves, and future against the background of social and political turmoil, while men land on the surface of the moon.

Writing is Yvette’s final career.  She has been an entrepreneur, a professional actress, a advertising producer for a large New York Agency and an administrator at Brown University. Her first book, A Reluctant Life, is a memoir about the death of her husband and the process of grief, which won an honorable mention at the New England Book Festival. Clara at Sixty is the fictionalized sequel.    Best Friends is her third non-fiction book. She continues to write and live in New England at the edge of a waterfall.

This event is free and open to the public.